Posted on September 21, 2010 by sstratkauskas

My two big ‘Victoria dates’ are now behind and both were extremely positive experiences! 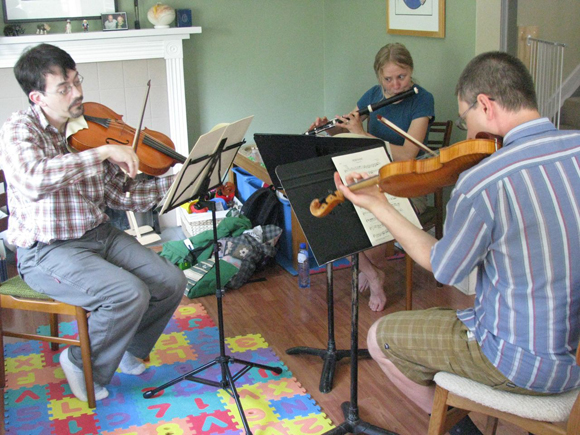 The first one, Aug 26th, was at St John the Divine Church, where my husband David is the organist, and we pretty much put this concert together ourselves. The programme consisted of two of Mozart’s Flute Quartets, C and D major, Beethoven’s Serenade and Haydn’s Divertimento in G major. I was joined by three great strings players: Paul Luchkow, violin (from Vancouver), Steve Creswell, viola and Nathan Whittaker, cello (both from Seattle). I had never worked with any of them before, however, it seemed like we had done so for years, as the music making and communication between us seemed so natural and effortless. It always feels so magical and great when that happens! And hearing the comments from the members of the audience, as well as reading the critic published on the local classical music website, this enjoyment of playing together clearly communicated to the listeners too.

Credits to Mozart, Beethoven and Haydn too: the music in this programme was so vivacious and effervescent, that it would bring a smile to anyone’s face. I certainly didn’t see anyone leaving frowning. Thank you so much Paul, Steve and Nathan for coming over to play this wonderful concert! I hope to have you all back here again soon!

My next public appearance, on Sept 18th, was part of the Early Music Society of the Islands concert series (special thanks to James Young, who is behind these series). Through this concert, I had the pleasure to get to know and play with sopranos Nancy Argenta, Noemi Kiss, viol player Natalie Mackie and harpsichordist Valerie Weeks.

The programme combined arias and cantatas by Carissimi, Couperin, Handel, Purcell and Scarlatti, as well as Handel’s Flute Sonata in C major and Couperin’s Premier Concert Royal, so I got some limelight myself, besides playing obbligato lines in the vocal works.

I found the concept of this concert a little amusing, as all five of us were women, and the combination of two sopranos and a flute is just about as treble-heavy as you can go. No complaints though, everyone was lovely and I do love high notes! I always love the challenge of listening and matching when playing with other instrumentalists, and with singers this is especially interesting, as they are so much more theatrical about their performance. Keeps you on your toes and makes you grow as a musician: the life-time work-in-process! And flute is the closest instrument to the human-voice, as we all know!

Also this concert got an extremely warm reception. I must admit I find the Victorian audiences very good listeners and very appreciative and enthusiastic! But not very mixed in age.. Any ideas on how to bring younger audiences to classical music concerts?!

Encouraged by these experiences, I and David are planning to start proper concert series at St John’s Church. (with much focus on local musicians and early music – surprise, surprise.) I want people to think that there is a Great Early Music Party going on in Victoria and it’s the place of great music making!

This entry was posted in Uncategorized. Bookmark the permalink.